why am I afraid of Jack Steiner? 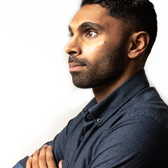 Kia ora e hoa, I'm going to be honest. I was scared to bring this topic up. But I need your help. To